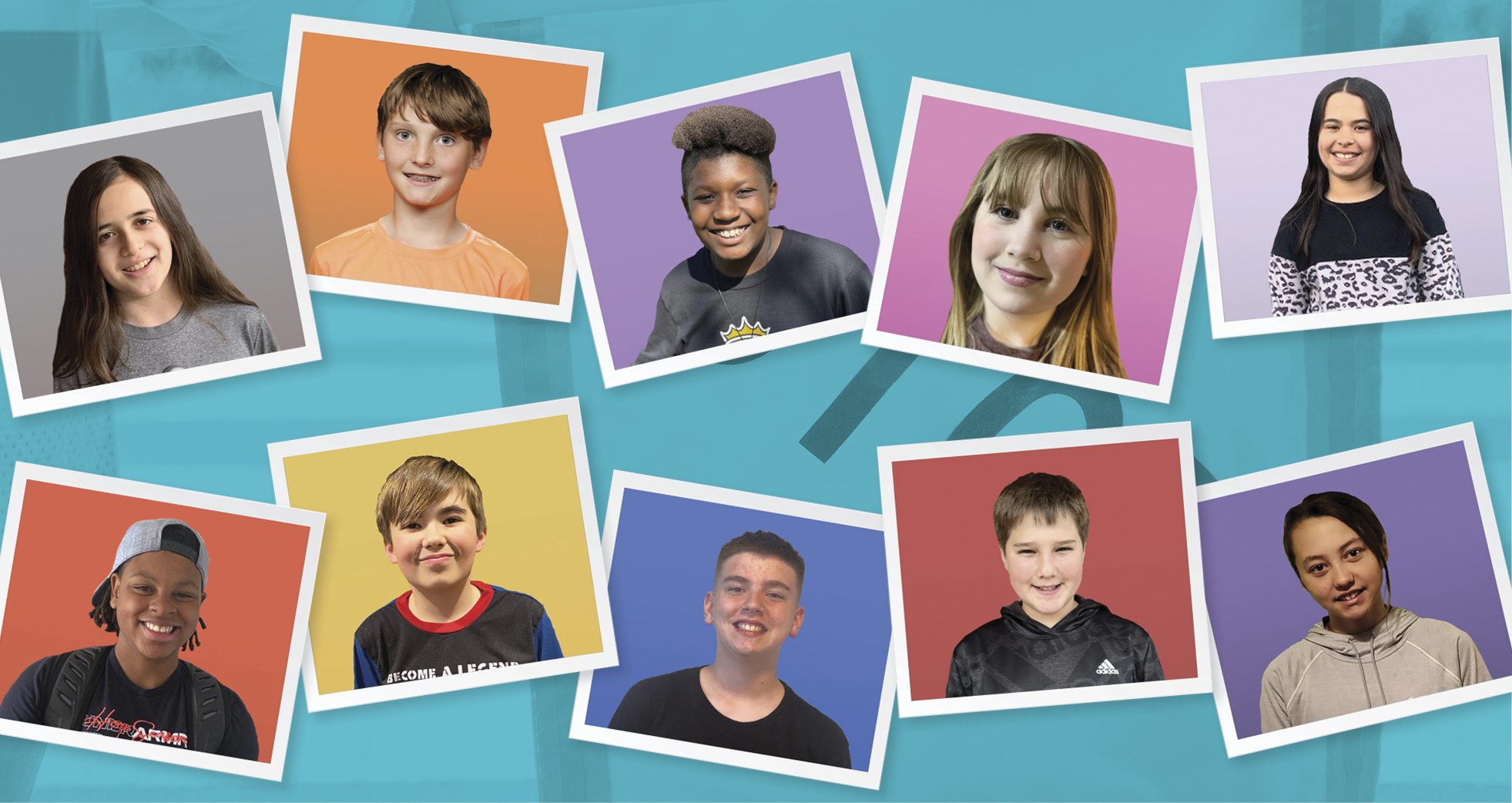 The ten students inducted into the 2022 AAA Washington School Safety Patrol Hall of Fame class represent communities from across Washington. A panel of judges from AAA Washington, the National Highway Traffic Safety Administration, the Office of the Superintendent of Public Instruction and the Washington Traffic Safety Commission selected these students for their traffic safety advocacy, leadership skills and efforts to improve their school’s squad.

“What I marvel at is how consistently and patiently Adi leads patrol members,” Owen said. “Adi treats them like an equal, like a part of the team, never demeaning in voice or showing impatience. You can tell from the tone in Adi’s voice and the look in their eyes that they genuinely cares about the safety of others.”

Owen said Adi never shies away from speaking up for safety. For example, he observed Adi explaining the dangers of kicking a ball near the cars to a group of boys and kindly asking them to stop. When the request went ignored, Adi stood with the boys, holding the ball until their parents arrived for pickup. Those parents thanked Adi for stepping in to protect their children.

“It is kids like Adi that truly are the backbone of a strong patrol squad,” Owen added. “Adi’s positive, helpful, never condescending leadership makes our program a vital part of our Echo Lake School and community!”

According to Forest View Elementary’s AAA School Safety Patrol advisor, Andrea Rosen, Caleb has the strongest natural safety instinct she has seen during her five years in this role. Because of that special ability, Rosen assigned Caleb the important task of escorting the school’s youngest students from one end of campus to the other, helping kindergarteners move between buses and classrooms.

“This means paying close attention to upwards of 10 students at a time,” Rosen said. “Caleb is often found walking backwards or walking to the side of the line so his eyes are always on the students. If a student is struggling, he has a way of redirecting the student’s focus without disrupting his job.”

As one of the few kids who can safely manage a crosswalk, Rosen said Caleb notices when drivers make potentially dangerous choices and sounds the alarm to ensure his fellow patrollers wait until it is safe to send students across the road.

“He is a bright spot to many of the kids at Forest View and a real asset to the patrol team,” Rosen added.

During her fourth year on the AAA School Safety Patrol at Hazel Wolf K-8, in Seattle, Josie asked if she could mentor the fifth-grade students eligible to join the program for the first time. According to patrol advisor, Martha Levenson, Josie’s outreach created the highest number of fifth grade patrol applications ever.

“Josie spoke about the benefits of doing patrol: serving community, making a larger contribution, connecting with kids you would not meet otherwise, developing teamwork, learning leadership skills and finding a voice in the community,” Levenson said. “She spoke wisely about her own development and what she has gotten from patrol.”

As soon as the fifth grade students joined patrol, Levenson said Josie made herself 100 percent available to all of them — explaining how to wear the uniforms, demonstrating how to hold/use the flags, and answering questions by email.

“It is this kind of confidence, poise, support and generosity that makes Josie such a unique leader and mentor in her work with the safety patrol,” Levenson said. “Her contribution has been extraordinary in a year when things were a little shaky at the start.”

“The Moran Prairie campus is huge, around five acres,” Smith explained. “The bus kids line up on the back side of the school and the parents who pick up their kids drive to the front of the building. It is a challenge for teachers — trying to be in two places at once. Responsible kids like Dayton help us manage these areas.”

Because of his good grades, Dayton is allowed to work “double shifts”, manning crosswalks before and after school. Smith says his kind and caring manner made a big impression on the younger kids.

“This position requires a huge commitment for the entire school year and the support from kids like Dayton makes our school run great,” Smith said.

Dayton’s fellow patrollers agreed and voted for him to be their school’s nominee for the 2022 Hall of Fame.

According to Oak Harbor Intermediate’s AAA School Safety Patrol advisor, Kris Bishop, Kylie is a gregarious student with the ability to put aside the chatter while on duty and focus all her attention on the cars, the pedestrians and safety.

“The job seems to fit her like a glove,” Bishop said. “Kylie has the natural ability to judge a safety gap before stepping up to cross students. She doesn’t falter in checking traffic in all directions before going into the street.”

Kylie also takes new patrollers under her wing to train them, volunteers to work the hardest corner and keeps calm in unexpected situations — like the time she kept control of kids anxious to cross the road as Bishop handled a fight between two students.

“As I dealt with the fight, Kylie held the walkers while being taunted by a student who wanted to cross the street when it wasn’t safe,” Bishop explained. “Kylie held her ground with the student and when the timing was right, crossed the student along with the rest of the pedestrians safely. I was very proud of her since standing up to this student wasn’t easy.”

“Josephine is the first patroller to step up and help the younger patrollers/new patrollers feel comfortable doing their job,” Ruiz said. “She is always following the rules and does her best to encourage others to do the same.”

According to Ruiz, Josephine is very considerate and supportive of others. When she sees something that needs attention, Ruiz says she either jumps in to solve it or seeks assistance from an adult.

“She stays in contact with me, mostly through email, with any concerns she has or any issue she feels needs to be discussed at our meetings,” Ruiz said.

At Samantha Smith Elementary, AAA School Safety Patrol advisor Virginia Romano says that in addition to working his own patrol posts every morning and most afternoons, Zach shows other patrollers how to perform their duties and notifies her of parents ignoring safe arrival/dismissal rules so she can have the principal send out a reminder email.

“He is always available and takes his responsibilities seriously to ensure that each position is covered and will be safe for all families and students,” Romano said.

Zach even used his personal time to watch how administrators handle a new traffic problem where parent vehicles were stacking up, making it difficult for buses to enter the school driveway. When he returned to duty, Zach worked that post, used those same techniques to ease congestion and even added a headset of red lights to alert parent drivers to the new procedures.

“His extra service has made all the difference in these days of COVID-19 and unexpected absences,” Romano said.

“She pointed out it was important that students who ride the bus be assigned to posts where they wouldn’t need to rush or run to board the bus,” Balfe said. “That’s how Jayda is — super caring, clear, aware of others and highly communicative.”

Jayda resolves interpersonal conflicts between patrol members who might want to work a different post or are having a bad day. She encourages the students to talk to each other or Balfe about any lingering issues.

“The depth of her care is tremendous and I have been inspired by how she is making a positive impact for others and the school community,” Balfe said.

At Elizabeth Blackwell Elementary, AAA School Safety Patrol advisor, Pegeen Nelson calls Alejandro her “Chief of Staff.” Due to COVID-19, school closures the previous year, Nelson needed to reboot her school’s patrol program with a group of students that had zero prior experience. She says Alejandro quickly stepped forward to learn the rules and procedures for every patrol position and trained every member of her 65-student crew.

“Alejandro is a self-starter and does not wait to be asked,” Nelson said. “He knows every job so well, even mine. He has been known to give me a gentle reminder when I forget something,” she added.

Alejandro assumed one of the patrol’s most important roles — organizing and managing the escort of the kindergarteners from the buses to their classrooms. Alejandro trained several patrol members to be responsible for the care and safety of each young student.

“It has been truly an honor to work with this young man,” Nelson said. “I look forward to seeing what he does in the future. Whatever it is, I know he will make a fantastic leader.”

“Mason always has a positive attitude and a team-first mentality,” Wright said. “He is always willing to carry equipment and traffic cones. If a less desirable spot is open, Mason routinely offers to fill that spot.”

In addition to providing assistance in training new patrollers, Wright says Mason helped him revamp their current duty posts and rotations, creating a much more streamlined and efficient system.

“Mason is a great role model, leader and mentor to his classmates,” Wright added.

AAA created the School Safety Patrol 102 years ago and partners with local agencies to bring the program to elementary schools across Washington. AAA Washington has been inducting outstanding patrollers into the local Hall of Fame for 30 years.